View Profile
Things are hardly ever quiet in B-Town; with the events lined up for each day of the week on top of their already heaving shooting schedules, it becomes rather tough for Bollywood celebrities to hide out for too long. So as our favorite stars show their face around town, the Fashion Police scrutinize the attires of those we spotted. Read on to find out more!
Tisca Chopra 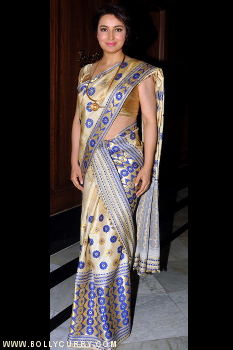 Witnessed at the North-East Festival held in Mumbai recently was Tisca Chopra in a beautiful gold with blue print mekhela chadar. The draping of the saree subtly accentuated her slim silhouette leaving the paparazzi with ample opportunities to snap pictures of her perfect curves. The look was completed with a pink shade of lipstick as well as the in-fashion Suhani Pittie necklace. BollyCurry Rating: 4/5
Samantha Ruth Prabhu 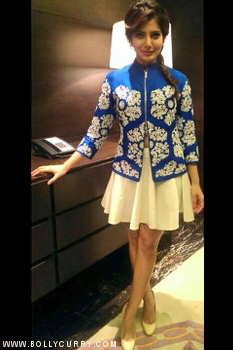 The actress who was seen in a cameo role in Ekk Deewana Tha (2012) has already managed to impress the Fashion Police team. Starting from the top is the brilliant choice of a braid on the side with her bangs puffed. The make-up kept to a minimum was yet another decision well-made. Now onto the the Rahul Mishra number that hungrily grabbed our attention; the white embroidered blue jacket matched amazingly well with the off-white A-line mini. Although we love this pairing, a pair of well fitted pants would have done the deal too. Henri Bendel earrings and cream colored Dior pumps finished her look. BollyCurry Rating: 4.5/5
Kalki Koechlin 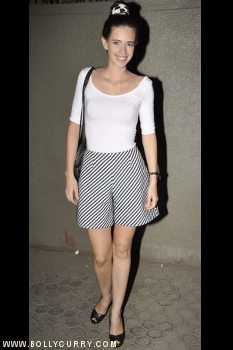 Spotted at Blue Frog for 'The Bartender' launch event was Kalki Koechlin whose outfit left us questioning her thought process behind it. Koechlin looked like she decide to stop by the event after her ballet lesson.The black and white striped shorts, which ended mid-thigh, was paired with a bodysuit-esque scoop-neck t-shirt. Koechlin's otherwise beautiful hair was in a slick bun on the top of her head held in place thanks to a black and white band, a.k.a. 90s fashion fail, scrunchie! She finished off the ensemble with black peep toe pumps! Oh the horror! BollyCurry Rating: 1/5
Tamanna Bhatia 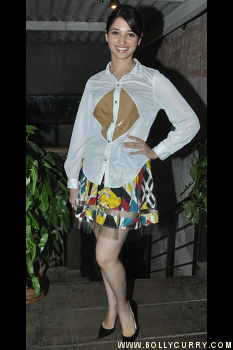 Soon be seen in Humshakals, Bhatia was spotted at Mumbai Eatery Pali Village Cafe in a Surendri by Yogesh Chaudhary number. The bold outfit from the runway was notably tweaked to make it more modest. Despite the tweaks, however, this was all in all a poor choice. The printed skirt, which was awkward to say the least, looked rather sloppy and more like a recycled plastic project gone wrong. The modified version of the shirt didn't sell itself either. We like what we saw with her hair; tied in a bun with the bangs out is something that we have seen on Bhatia before and it works. The make-up was kept to a minimum, thankfully, but the pointy-toed black pumps just irks our fashion nerves! BollyCurry Rating: 2/5
Vidya Balan 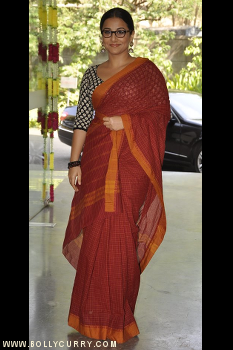 Pairing her red-orange saree with the Sabyasachi blouse that has been seen on her before was yet another imperfect choice for the recent event Vidya Balan attended. Hair up in a bun with the usual middle parting and those heavy rimmed black glasses is too reminiscent of a teacher. However, those Amprapali jhumka's are to die for and the only thing that works with this Eastern style of dressing that Balan is fixated with. Yet another predictable fashion outing by Ms. Balan. Frankly, we are bored! BollyCurry Rating: 3/5
So, that's it, Fashionistas! Not much to talk about this week, but plenty to opinion over! Do leave your comments below on which outfit you think worked and which bombed. Till next time!
Author: Saraa K.
Editor(s): Marsh P. and Jenifer Y.
Graphics: Marsh P.
Do you have a suggestion or comment for BollyCurry? Drop us a PM at BC_Dropbox today.
5 Likes

Tamannaah Bhatia reveals being ‘Scared for her life’; opens up on her ...