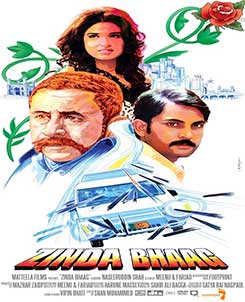 Gaur is here with her film "Zinda Bhaag" which will be shown at the ongoing 19th Kolkata International Film Festival (KIFF). The screening is scheduled for Nov 16.

"The Pakistani film industry has all but collapsed in the 1990s...frankly there aren't that many films that are being made," said Gaur, who has co-directed "Zindaa Bhaag" with Farjad Nabi.

"Now there's a new crop of filmmakers who are foreign educated, who have just returned and making cinema again...they are not mainstream films as such..."

"I think there are very interesting projects that you will see from Pakistan in the years to come. Spotlight is returning to Pakistani cinema," she added.

Indian actor Naseeruddin Shah-starrer "Zinda Bhaag" is the best example of this changing trend as it is the first movie from Pakistan sent for Oscar consideration in the last 50 years.

Throwing light on the plight of the country's film industry or Lollywood as it was once popularly known, Gaur said independent filmmakers face hurdles but are swimming against the tide to churn out meaningful cinema.

"Many films are being made but not more than four or five so there aren't much Pakistani cinema. Making films anywhere is a big big hurdle for independent filmmakers and in Pakistan's industry which went through a bad phase in the 1990s... its rising again. It's even more difficult to make a film there...but we overcame many difficulties."

"Since then (1990s) the filmmakers have been struggling."

"Zinda Bhaag" speaks the mind of the modern youth in Pakistan through three 20-something men, who wish to make a living anywhere but in their own country and their city Lahore.

Gaur is eyeing a December release for the film in India.

"It's been running for seven weeks in Pakistan and I hope it gets a commercial release in India too."

Salman Khan's Official Statement about his Connection with ...
21 minutes ago