View Profile
Here's another quake hitting bold and beautiful Bollywood. The made for each other couple, Arbaaz Khan and Malaika Arora Khan, have separated and will be seeking talaq, going by the indisputable indications. This comes soon after the stunning, overnight as it were, split between Shahid Kapur and Kareena Kapoor, looked upon as the head-over-heels in love pair for quite some time. While both Shahid and Kareena kept their counsel, Shahid rose in the esteem of his 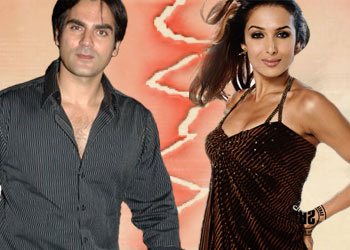 Featured Video
fans for playing the dignified lover being dumped after all those wild quotable quotes about their everlasting love and their tongue wrestling in a public place MMS. Kareena, who is now looked upon as the coolest babe on Saif Ali Khan's arm (and in his arms), fell for Saif during the outdoors of Tashan and the news plopped out just prior to the release of Shahid-Kareena's only hit, Jab We Met. Saif, just out of his torrid relationship with Italian bomb, Rozza Catalano, has gone through the pleasant agony of tatooing Kareena's name on his arm, and Kareena is in the euphoric quoteable quote mode again as if nothing or Shahid ever happened only the other day! Of course, true to showbiz type, both Saif and Kareena are also emphasising to everyone who cares to listen, that their career is on the upswing at the moment, and certainly they will marry, but don't see that happening before another five years. The emergency exit for another couple of Shahids and Rozzas to happen in the next five years.
On the surface, the Arbaaz Khan-Malaika Arora affair looked a lot more cool and dignified, and the eyebrow raising was because people couldn't believe that what they were seeing was worth believing. They seemed to be too genuinely happily married to be true. And they lasted all of 10 years and a five-year-old son, Arhaan.
After his much touted acting debut in Daraar, where he played a debonair sunglassed villain, Arbaaz's career never took off, despite the family film where all three Khan brothers played stellar roles, Hello Brother. He managed two-and-a-half roles in the years since, but all of them rather insignificant. The last we saw him in was Apoorva Lakhia's Shootout At Lokhandwala, starring Sanjay Dutt, in which he played a dashing cop, buit the film was not a commercial success either. Malaika, on the other hand, was a high-profile model and hit the Bollywood jackpot by swivelling her hips with Shah Rukh Khan atop a moving train. Dil Se's Chhaiyaan Chhaiyaan made her a memorable item girl, and she made her sexual presence felt as a 'love and agony aunt' anchor on television and make cleaage and leg showing appearances at glitzy 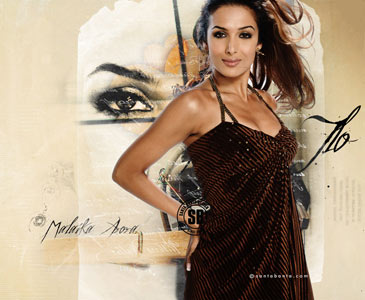 parties and inaugurals. Kaante's Mahi ve and Welcome's Hoth Rasiley, also added punch to her power as an item girl. In a split-second appearance among a galaxy of Bollywood stars in Heyy Baby and Om Shanti Om, both the sisters Malaika and Amrita Arora are seen shaking their booty, along with Arbaaz!
When a television channel, Live India, broke the story late last night (April 16) and asked the couple separately about the divorce, Arbaaz and Malaika neither confirmed nor refuted the news, but their replies were loaded. "It is my private life and I would not like to discuss it in public," Arbaaz said, adding, "Life is uncertain and no one knows what will happen tomorrow."

Malaika seemed to be pretty shaken and also asserted, weakly though, "It is too personal and I would like to keep quiet on this issue." When reminded that keeping quiet on such issues indicates trouble, Malaika reiterated, "I believe silence is golden."

The news comes as a surprise especially at a time when Malaika and Arbaaz are getting ready for their Kannada film together, Shaadi Ke Side Effects. The film, which is ironically about marriage and infidelity, casts Malaika in her first lead role. It could just be a publicity gimmick for the film, but their reactions did not seem to indicate that. Even the Kareena-Shahid split was initially supposed to be a gimmick for pushing Jab We Met.

Arbaaz and Malaika's 10-year-old marriage is to end, it can safely be concluded, unless there is 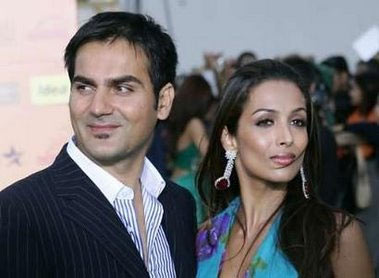 a last minute reconciliation. They have one son, Arhaan, from this marriage and people have always looked on in awe at the couple's successful bonding despite a failed career of Arbaaz and Malaika always being the hot-bod model mom who even appeared in various stages of undress in Maxim recently, but with a total understanding between the couple. Ten years of mutual respect between a high-profile couple is not usual in Bollywood or showbiz. That is why this comes as a shocker, coming as it is without any runway clues.

The news trickling in is that Arbaaz has found a new love with whom he is living secretly at a Bandra property. Even during the Shahid-Kareena affair, there were rumours of the goody-goody Shahid having been seen with co-star Amrita Rao too many times. Kareena is supposed to have spit fire and doused any flame waiting to break out. But here, Arbaaz has actually separated from Malaika, his wife since 1997 and mother to five-year old Arhaan, two weeks ago. A friend of Malaika has told the media, "Malaika and Arbaaz have stopped communicating with each other completely. She is not even aware where Arbaaz is."

Arbaaz, on the split and a rumoured second marriage, says, "I don't want to comment on my personal life or on Malaika. Why is the press so impatient? They will know whether I'm remarrying or not in due time. I will probably talk about it soon. At this moment I don't want to say anything further."


That says it all, actually!!