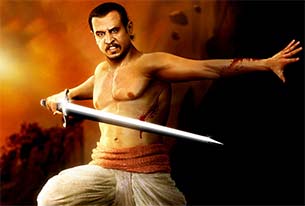 A special song titled "Koottam Seru, Kosham Podu" was unveiled online Wednesday to celebrate the release of Rajinikanth-starrer "Kochadaiyaan". The song captures the fan frenzy surrounding the release of a movie of the superstar.

The music video, which has vocals by playback singers Velmurugan and Satyan, is titled "First Day, First Show".

"It's about first day first show of Thalaivar's movie release and the typical fan frenzy that surrounds the event. With 'Kochadaiyaan' set to hit the screens soon, it's celebration time for fans," Velmurugan told IANS.

The song, starring singer Velmurugan with a large "Kochadaiiyaan" cutout, highlights the rituals performed during the film's release - breaking a pumpkin and coconut, garlanding the cutout and trumpet blazing folk dances.

Velmurugan is popular for his songs such as "Madura Kulunga Kulunga", "Otha Sollaaala" and "Local Boys".