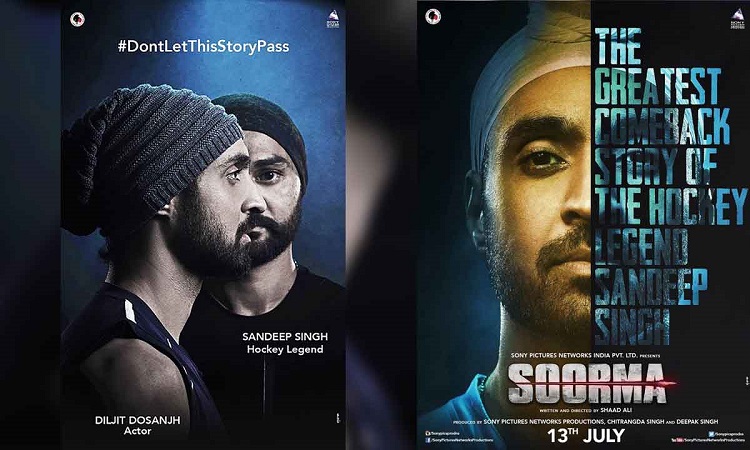 Soorma is going strong at the box office with the powerful word of mouth.
It has collected 3.20 crores on the day of release, later the film went on collecting 5.05 crores on Saturday, 5.60 crores on Sunday. After finishing the weekend on the good note the film collected 2 crores on Monday, 1.94 cries on Tuesday, 1.77 crores on Wednesday and finally the week ended with 1.65 crores on Thursday taking the Total to 21.21 crores.
Based on the life journey of Hockey Player Sandeep Singh, Soorma is garnering immense love and appreciation from the audience and critics alike.
The inspirational film has got a 'U' certificate and has been cleared by the Pakistani censor board and Kuwait censor board too.
The film is witnessing footfalls by kids and family in larger numbers at the theatres.
Soorma is an inspiring true story of the human spirit, about a player, who made headlines for his miraculous comeback after an unfortunate accident.
The film has garnered rave reviews from Bollywood Celebrities and critics.
It is a lesser known fact that, Sandeep Singh has been hailed as one of the world' most dangerous drag-flickers of all time with drag speeds of over 145 km/hr which led to his nickname, 'Flicker Singh'.
Sandeep Singh's inspiring story has had the makers keen to bring his life on the silver screen.
Soorma will feature Diljit Dosanjh essaying the role of Sandeep Singh alongside Taapsee Pannu and Angad Bedi in the pivotal roles.
Produced by Sony Pictures Networks Productions, Chitrangda Singh, and Deepak Singh, Soorma is written & directed by Shaad Ali has released on 13th July 2018 and is running with a positive word of mouth at the box office.
0 Likes

Chitrangda Singh says she ‘lost Modeling Assignments’ because of Dusky ...