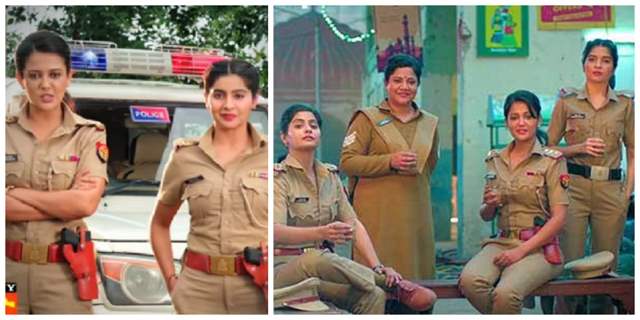 Earlier this year, Sony SAB launched ‘Maddam Sir’, a show which addresses social issues through the eyes of four dynamic women police officers taking every challenge as it comes and solving cases with jazbaat i.e policing with a heart. The show features Gulki Joshi as S.H.O Haseena Mallik and Yukti Kapoor known as Sub Inspector Karishma Singh along with Sonali Naik as Head Constable Pushpa and Bhavika Sharma as Constable Santosh.

Taking a cue from the challenges presented to them in their reel-life as the Maddam Sir team, the actresses had an exclusive tête-à-tête with real life women police officers. The cast even discussed nuances of being able to successfully represent policewomen on-screen and took this opportunity to thank the real-life women police officers for their contribution towards our safety and well-being during this challenging phase

Gulki Joshi aka S.H.O Haseena Mallik shared, “When I wore the prestigious uniform during my audition for Maddam Sir, I didn’t know if I will get the role but getting the mere opportunity to wear a police officer’s uniform filled me with such pride. I was ecstatic when I got the role of Haseena Mallik, but with that came the responsibility to do justice to this role and represent our heroes with immense respect. These past few months have filled me with so much gratitude towards the police force and witnessing their relentless and courageous efforts towards keeping the society safe by putting themselves on the frontline. I am so proud to have the opportunity to represent such a force and I want to salute the Police force for their unparalleled contribution. They have truly defined the words- Kuch Baat Hain Kyunki Jazbaat Hain.”

Yukti Kapoor also known as Sub Inspector Karishma Singh shared, “I have immense gratitude and respect for our police forces around the country and this phase has personified their wholehearted dedication towards us as a society. The only reason we are at home, safe under a shelter is because of them fighting at the frontline to keep everything in place and ensuring people are safe. They have been away from their families and have been risking their lives to save ours and I will always be grateful to the entire Police force for their contribution. I am extremely proud to have an opportunity to play the role of a police officer in Maddam Sir. Our show celebrates policing with heart and these past months have reflected the same on a larger scale. I thank every police officer in our country for their selfless contribution and I salute their Jazbaat and courage.”

"Would like to thank the entire team of Sony SAB to make this event possible. Grateful to the women police officers who could be with us today despite their busy schedule. Nothing makes me proud than having this opportunity to learn and personally thank the police officers for their efforts during these challenging times."

Bhavika Sharma aka 'Sassy' Santosh says, "I am the youngest in the Mahila Police Station here and I could not have had a better experience than this. While in the show I have always sought inspiration from Haseena and Karishma, today I had an opportunity to seek inspiration from real-life women police officers who are working towards keeping us safe."

#SwitchOnSAB and watch Maddam Sir solve cases with jazbaat, every Monday – Friday from 13th July onwards at 10pm only on Sony SAB.

“Maddam Sir is a milestone for our friendship”, says Gulki Joshi and ...

The Bhatts were involved throughout: Ankit Tiwari on his ...
9 minutes ago