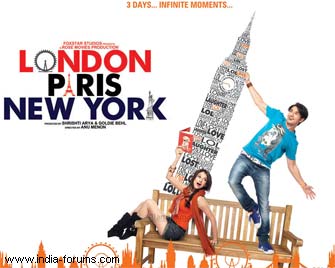 The music rights of romantic comedy "London Paris New York" have been reserved by Sony Music. All seven songs in the album have been written, composed and sung by Ali Zafar, who is also the movie's lead actor.

The album, which will be digitally available starting Jan 30, will also have the movie's actress, Aditi Rao Hydari lending her voice to a song called "Voh dekhane mein".

The release of the album will be in the first week of February across key retail outlets.

"London Paris New York" follows its characters' personal journey and their love story as they meet in London, flirt in Paris and fall in love in New York for a night each over eight years.

The songs of the movie blend strongly with the theme of the scene and location.

"This generation-next movie comes with a variety of songs where the multi-faceted creative talent, Ali Zafar, has sung all of them giving each song his own distinctive style that merges perfectly with each moment in the film," Sanujeet Bhujabal, marketing director, Sony Music India, said in a press statement.

"The freshness quotient of the music will be loved by all music fans whether young or those who are young at heart," added Bhujabal.

Aditi Rao Hydari opens up on designing a line of athleisure created ...