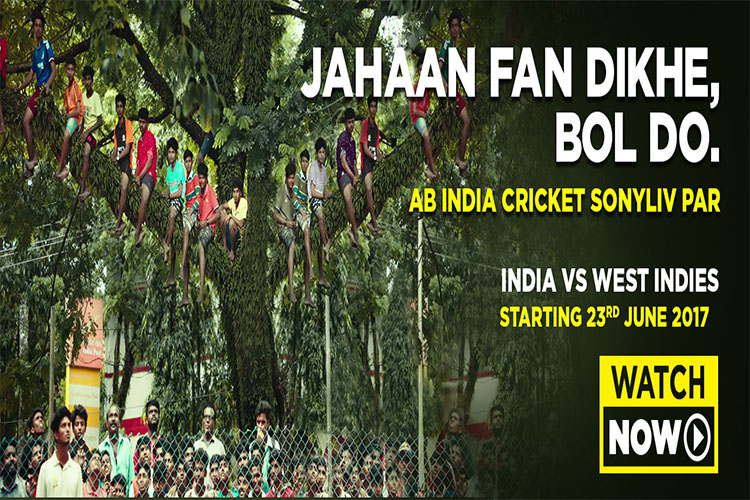 It's time to take out the recliners and stock the refrigerators, as Indian fans get ready to celebrate yet another long and intense season of their favourite sport, cricket.
As team India readies for a face-off against the West Indies, the Sri Lankans and the South Africans over the next few months, cricket fans are in for a huge treat of nonstop cricketing action.They will now witness their favourite team battle it out on Sony Pictures Networks India's (SPN) digital platform - SonyLIV; the online destination which cricket lovers can log onto for catching the most of the Indian cricketing action this year.
With an aim to dominate online sports viewership, SonyLIV brings its sports campaign out to bat. Jahaan Fan Dikhe Bol Do, celebrates the inherent diversity of Indian cricket fans and implores them to spread the word about Indian cricket arriving in a grand way on SonyLIV.
Here's what Uday Sodhi, EVP and Head - Digital Business, SonyLIV had to say about it, "By making India's international cricket tour available to SonyLIV audiences, we intend to reinforce our credentials as the online destination for fans to enjoy an ultimate cricketing experience. Jahaan Fan Dikhe Bol Do fuels the passion that rages within each fan while celebrating this sport. The campaign urges cricket fans to spread the cheer and unite in the rallying cry of superior sporting action."
Mr. Paritosh Srivastava, COO, Publicis Communications added, "Indian cricket being available on SonyLIV is a huge opportunity for us to attract fans to our platform. The tougher part of this campaign was to come up with an idea on cricket that is fresh and unseen. We believe that Jahaan Fan Dikhe Bol Do captures the true spirit of the Indian fan and does justice to the fervour of cricket."

Will Bhimrao and his brothers be able to stop Manjula's wedding?

Sonal Vengurlekar asks people to Be Real and Stop Fakeness!

satgill 6 years ago So what? why make a big deal out of this?