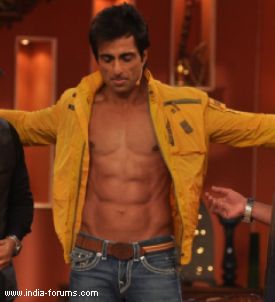 After being in the news for his six-pack abs in his latest film "R...Rajkumar", actor Sonu Sood finds himself fit to give fitness advise.

He says there's a connect between gymming and eating right.

"I've realised if you work hard in your gym, you will never eat junk, (and) you tend to cheat on your diet when you don't know the efforts put during workouts," Sonu tweeted Thursday.

From his washboard abs, one can make out the efforts he would have put in for "R...Rajkumar".