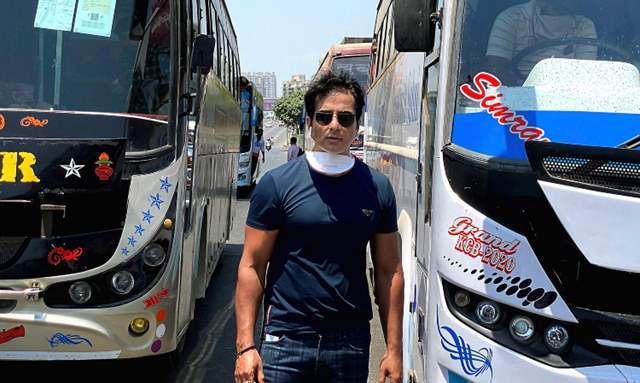 Sonu Sood continues to make a stand for the unprivileged working class of the nation amid the coronavirus crisis. The actor’s efforts have helped thousands of migrants reach home as the majority of the population was forced to take their leave from respective states leading to an unprecedented exodus.

Sood turned out to be a real-life hero with his generosity and several Bollywood filmmakers seem to be impressed with his story. Many have already him for a movie featuring his bighearted gestures and philanthropy.

A Mumbai Mirror report stated that several makers and writers with scripts have approached Sonu Sood for a biopic but he is yet to greenlit any venture because he feels, “It's a bit too early".

Another Times of India report stated that while there is still time for his heroic persona to be etched on the silver screen, a book giving a glimpse of his deeds is on its way.

Sonu Sood had shared in a statement, "I want to thank god for making me a catalyst in helping the migrants. While my heart beats in Mumbai, after this movement I feel a part of me lives in the villages of UP, Bihar, Jharkhand, Assam, Uttarakhand and various other states where I have now found new friends and made deep connections. I have decided to put these experiences, stories that are embedded in my soul forever, in a book.”

The Dabangg actor has also considered a few interesting films offers. Talking about the same, he told Mumbai Mirror, “They are different, larger-than-life, positive roles that I have always wanted to play. It's heartening that the best of producers, directors and writers want to work with me today. But I have been so busy that I haven't been able to read too many of these scripts because my mind is still preoccupied with this work. I have asked the makers for some more time to get back."

Sonu Sood directed his efforts towards relieving the plight of migrant workers and students who are stuck in different parts of the nation. From arranging busses to making food donations, Sood has done it all and he continues to do so as the number of migrants seeking help through social media.