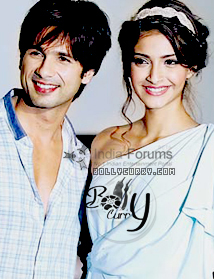 Here's one such interesting little 'secret' we found out, from behind the scenes!

A veteran artist himself, daddy and director Pankaj Kapur is heard to have pulled off Aamir like acts on sets, in obsessing with the term perfection. Pankaj, like any quality driven filmmaker wanted his actors to undergo a sort of workshop to get under the skin of their respective characters.

He took the 'onscreen realism' too far, when he expected Shahid and Sonam to turn in their cell phones, and other means of modern communication, for a two month period, and fall back to writing letters instead, for routine interaction. If the leads protested, their resistance fell flat, and although both Sonam and Shahid initially found the idea preposterous, they eventually not only gave in, but actually grew used to the obsolete custom. So much, that we now hear, how two years later the two popular actors still occasionally write to each other!

Pankaj sure sounds one tough task master - but whether or not his film-making will impress, we shall soon see! Here's wishing the Mausam team fares well!