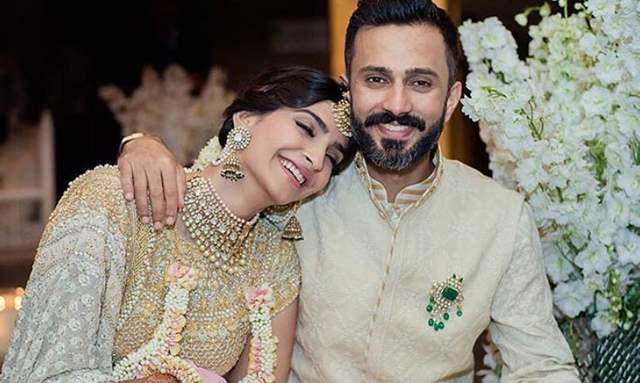 Sonam Kapoor Ahuja and Anand Ahuja give us major couple goals with their perky social media PDA. The actress tied the knot with longtime boyfriend Anand in a fairytale wedding in 2018. The couple exchanged vows in a traditional Anand Karaj ceremony and later hosted a grand reception for their Bollywood friends and family.

While the wedding was a dream come true for Sonam, it was heartbreaking for many of her fans. During a recent live chat, a fan claimed that to have cried inconsolably post her wedding, to which the actress went all ‘aww’ and she said “I am sorry” to the fan.

Also spilling details of how she met Anand for the first time, Sonam shares:

“I met him (Anand) when I was promoting Prem Ratan Dhan Payo and my friend was trying to set me up with his best friend, and instead I spoke to him the whole evening and he added me on Facebook after that evening and then he started talking and that’s how we met.”

And well, everything after that is well known to us!

Sonam and Anand have to face the trouble of long-distance relationship at times as the two work in different cities and time cycles. While the actress is based in Mumbai, her businessman husband is mostly based out, in London. However, the Neerja star says that this does not affect their relationship.

Recently, the duo returned to Delhi from London owing to the current scenario in the world . While the couple does not bear any symptoms of Coronavirus, they will still be isolating themselves and stay in self-quarantine for a few days.

Breaking
Breaking Namish Taneja back on ‘Aye Mere Humsafar’ sets after ...
19 minutes ago

No Escape Plan for Rakul; To Appear for Questioning before ...
26 minutes ago

Deepika Padukone to Reach Mumbai From Goa in Charter Plan; ...
41 minutes ago