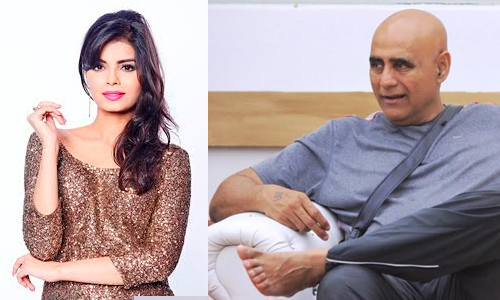 As Bigg Boss Season 8 comes to an end to make way for 'Bigg Boss Halla Bol',  two housemates were shown the door in order to make space for more. After competing with Pritam, Karishma, Dimpy and Ali, Sonali Raut and Puneet Issar were being evicted from the Bigg Boss house this week.

Puneet Issar and Sonali Raut made their mark in their own unique ways. Puneet emerged as the father figure and guardian for all the housemates whereas Sonali was the youngest and the most carefree contestant of this season.

The Black Mamba and Mufasa of Bigg Boss 8 leave behind a memorable thread of love and hate relationships in the house. Be it Sonali Raut in her lazy avatar or Puneet Issar's anger management problems the two have emerged as one of the most talked about contestants of this season. Puneet found his place as the leader of the now trending P3G gang while Sonali found a friend and a big brother in co-contestants Sushant Divgikar and Praneet Bhatt.

Puneet's fatherly connection and Sonali's attraction towards Gautam made quite a lot of buzz around the nation. However eventually due to difference in personalities Sonali was seen parting her ways with Gautam while Puneet's bond with the hunk grew stronger by each passing day. Sonali made a mark with her "I care a damn attitude". She was labeled as the laziest contestant of the house but ironically Sonali is the only one in the show this season who has never gotten punished during the judgment days.

Puneet's soured relationship with co-contestant Karishma Tanna constantly remained a significant part of the show. Just like the former contestant of Season 2 Rahul Mahajan, Duryodhan of the television industry Puneet too was disqualified from the Bigg Boss house after his unfortunate incident with ex-contestant Arya Babbar. However, he was back on the show to bear the consequences of his decision as he was kept in the jail for one whole week.

Sonali who is known for her exceptional behavior and no non-sense personality too had her share of high and low points during her time in the show. Be it her onscreen marriage with Upen Patel, an unfortunate argument with Diandra or her brief but news making closeness with Gautam, Sonali remained an eye candy on the show throughout. But, her shocking reactions knew no bounds when she slapped Ali on national television although she also got nominated for the whole season after doing so.

As Sonali and Puneet leave the Bigg Boss house to reunite with the outside World, they also leave behind some unforgettable memories for the show. We wish them well and all the best for their future endeavors and hope all their prayers are answered!