View Profile
The various speculations about whether or not Sonakshi Sinha will be paired opposite the legendary Kamal Haasan can now be put to rest. The latest buzz is that the Dabangg-girl has finally been confirmed to play Kamal Haasan's heroine in his upcoming trilingual. 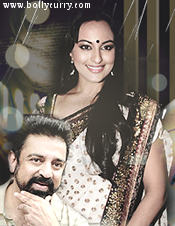 The new B-Town beauty had been offered the role a while ago, but reportedly she had been in a dilemma as to whether to accept it or not considering the huge age gap of 33 years between her and Kamal. It is heard that the actress had been consulting many of her well-wishers, including Daddy Shotgun regarding the project. Most of the people had advised her to take it up as it would increase her popularity down the south. Finally, the actress seems to have made up her mind and has reportedly given her consent, showing her enthusiasm to director Selvaraghavan to work in his film.
Many scenes of the movie are going to be shot in London and is said to be inspired from the psychological thriller, Hannibal. The movie is expected to start production this month.
Seems like the Dabangg beauty is perfectly paving her way into the industry as she works with one ace actor after the other!
Editor(s): Hershi & Jenifer.
Graphics: Zunni.