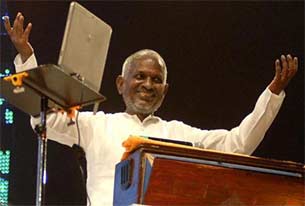 Legendary Ilayaraja, who was recently hospitalised after suffering a mild heart attack, recorded a song for upcoming Tamil period-drama "Rajaraja Chozhanin Porval". The film's lead actor Snehan was in awe of the composer's dedication.

"We had requested Raja sir to take rest, but he came to the studio yesterday (Sunday) and recorded a song. He said that he had already delayed work by about two weeks and didn't want to delay any further. He had recently called off his concert in Malaysia," Snehan told IANS.

Ilayaraja, 70, was rushed to a private hospital here Dec 23 after he complained of chest pain. The composer was scheduled to travel to Malaysia Dec 28, but cancelled it because he was still recuperating.

Snehan said that he didn't want to start the New Year on a bad note.

"He was very particular that his work doesn't get postponed in the New Year. He felt bad for not making it to Malaysia for the concert," he added.