View Profile
After many teasers, first looks and promos, the official poster for the Shahrukh Khan and Kareena Kapoor starrer 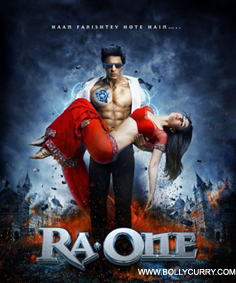 Ra.one has finally been revealed and it definitely seems to be riding high on everyone's expectations.
Featuring SRK in a ripped-open shirt revealing his perfectly scorched abs and in his arms an unconscious Bebo who looks ravishing in her Chammak Challo attire, SRK leaves a lasting impression given the electronic gizmo in his chest and those cool shades!
But that's not all! With the poster the synopsis for the film has also been revealed. The plot revolves around a South-Indian father trying to fit in his son's 'dude-fied' world and a mother who is torn between two of the most important people in her life - her husband and her son. Just as the father-son duo get on the right tracks, Shekhar, the father (played by SRK) digs gold as he designs one helluva game!
But ... all hell breaks lose as the game they crafted to be played, starts playing them! While all the things in the family start falling to pieces, they find themselves in middle of crash - a crash that would make their lives go KABOOM!
Check out this latest poster from Ra.One which stars SRK, Kareena and Arjun Rampal in chief roles while actors Sanjay Dutt and Priyanka Chopra make guest appearance. The films hits theaters on 26th of October this year!
For other goodies and tid-bits from Ra.One, be sure to keep an eye on the place, until then...!

Ashalata Wabgaokar passes away due to COVID-19
18 minutes ago

Zarina Wahab was Tested Positive for COVID-19; Actress ...
28 minutes ago