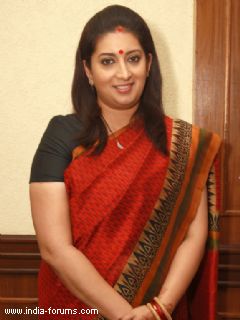 Sudha Shivpuri, who played the elderly 'Baa' to Smriti Zubin Irani when they starred together in the long-running TV soap opera Kyunki Saas Bhi Kabhi Bahu Thi , has sent her blessings and good wishes to the newly appointed cabinet minister, whom she believes will carry out her duties with utmost dedication.

The ailing theatre, film and TV veteran is recuperating at her residence in Mumbai after suffering a stroke in December 2013. She was even hospitalized for a little over two months, but currently, she can't talk too much due to tracheotomy.

Yet, Sudha, 75, agreed to share her thoughts via her son in a telephonic conversation from Mumbai.

"I have just sent her my aashirwaad (blessing) that 'khoob tarakki karo' (achieve a lot of success in life)'. And call me. Wish you all the love and luck," she conveyed.

Smriti, a former model, Miss India contestant, TV actress and producer, ventured into politics in 2003 when she joined the Bharatiya Janata Party (BJP). On Monday, she was sworn in as a minister in the Narendra Modi government, and she has been entrusted with the Human Resource Development portfolio.

Sudha said Smriti is "dedicated, hardworking and caring", she is "well informed", and has a "constant quest for knowledge".

"She used to keep reading something or the other all the time on the sets," said Sudha, who also shared screen space with Smriti in Maniben.com.

"Smriti 'khoob bhalaa karegi' (Smriti will do a lot of good), and whatever she does, she will try her best to do it right and perfectly," she added.