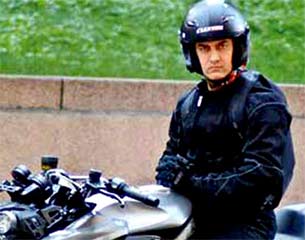 With two highly successful prequels, it is no wonder that the expectations from the movie, produced under the Yash Raj Films banner and directed by Vijay Krishna Acharya, are high.

Also starring Abhishek Bachchan, Uday Chopra and Katrina Kaif, the movie's music and trailers have already proven to be an appetiser for the audiences.

Touted as one of the biggest releases this year, it comes with an expectation of towering over the box office collections of past releases of 2013. Made on an extravagant budget of approximately Rs.100 crore, the film will be releasing in about 4,000 screens in India.

"There is a possibility of the film crossing the Rs.300 crore mark. But we will have to wait and watch," said Rajesh Thadani of Multimedia Combines.

In the film, Abhishek and Uday will be seen reprising their roles of Jai Dixit and Ali from the last two "Dhoom" movies, while Aamir steps in to play a negative role as a gymnast.

The film's promotions have been low key as "less is more" for the movie, Aamir had said earlier.

Promoting films on television shows seems to have become a trend, but "Dhoom 3" comes as an exception. The cast has not been seen on many TV shows promoting the film although superstar Salman Khan was seen talking about the film on his show "Bigg Boss-Saath 7".

"We believe that less is more for this film and even curiosity will be there," said Aamir, whose innovative promotions and marketing of his own productions, are always a hit.

In fact, to maintain the novelty of the film, the makers decided against having any sort of preview show including one which is usually organised for the cast and crew of the film.

For "Dhoom 3", the makers have, however, gone all out as far as launching an extensive range of merchandise is concerned.

From mobile phones and Barbie dolls to fashion accessories and notebooks - there are over 200 varieties of products and 20 partners with a combined penetration at more than 20,000 retail touch points. The price ranges from Rs.69 to Rs.9,000.

"Dhoom 3" will be Bollywood's first movie to be released in the IMAX format, a specialised film format.

Starting its journey with the first in the "Dhoom" series in 2003, the franchise has had an increasing number of fans with each film. The first movie starred John Abraham as the villain, while the second installment "Dhoom 2", which came out in 2006, was also a blockbuster. It featured Hrithik Roshan as the bad man.

Aamir's new avatar is something to be watched out for!