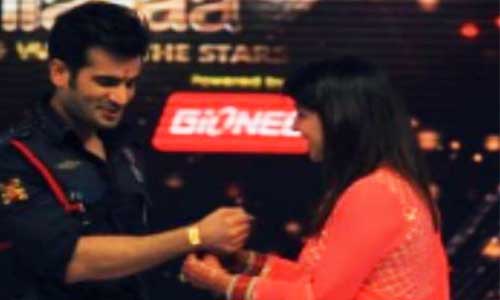 Raksha Bandhan is just round the corners and looks like it is the trend of this season to bring sisters on the sets of the show and do a Rakshabandhan story.

We will be celebrating Rakshabandhan on Sunday and Jhalak also airs its second episode on Sundays. Keeping the occasion in mind, we came to know that Karan Tacker's dear sister Sasha Tacker surprised him by visiting the sets of Jhalak Dikhhlaa Jaa Season 7.

Everyone has witnessed the love between Karan and Sasha through various social networking site and Karan has also went on to record and spoke about how important Sasha is in his life.

We got in touch with Karan to know what he feels for his sister and this is what he had to say. "Sasha and I are like brothers to one another. As children, both of us used to fight a lot. To be honest, Sasha has brought me up like a mother - I have learn't everything from her. Everything I am today is because of her. This is our first Rakhi together after her wedding but unfortunately she is not going to be in the country but she tied me a special rakhi with 'Tacker' engraved on it."

All the good wishes to this brother-sister Jodi on this Rakshabandhan and hope the love between them remain the same forever.

jasmeet92 3 years ago The story of the movie is inspirational and the movie is very good and i really enjoy this movie.

KiranSonu1 6 years ago Karan Tacker & Sasha Tacker sibiling moment was so Lovly.. They r so cute.

nupurdas1 6 years ago Wow so sweet moment it was... Karan Tacker & Sasha they r so adorble

samicute 6 years ago Karan Tacker...Love your bond with your family and friends and those close to you...hope you get their love and care forever...!!!!

Kryan_SanDhir 6 years ago I love the sister brother bond this duo share &lt;3 love u Karan Tacker And Sasha Tacker

simplysakshi 6 years ago Karan Tacker...Love your bond with your family and friends and those close to you...hope you get their love and care forever...!!!!