View Profile
The Dabangg beauty, Sonakshi Sinha, who has recently been busy shooting for her much talked about forthcoming movie, Lootere, took a rather fruitful break from her busy 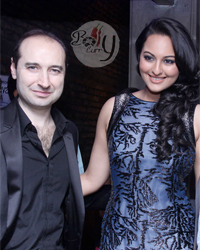 schedule a few days back when she was invited to a party thrown by her designer friends, Dev and Nil - whom she walked the ramp for during the early stages of her modelling career.

The Kolkata based designers partied in the honour of Tommaso Cavalli's visit to India for the launch of Cavalli Vodka, where the 'mast mast nain' babe was seen interacting briefly with the fashion icon's son. Yes, that's right, the famous Italian designer, best known for his creation of the sand-blasted jeans - Roberto Cavalli's son, who, just for the record, steers clear from fashion!

But fear not, he intends to keep the luxury in the family legacy, as in previous statements he has been known to acknowledge India to be amongst the fastest-rising luxury markets in the world, and Cavalli's pleasurable urge to be here.

After years of planning, son Tommaso has successfully launched his Vodka just days ago, which may possibly bring famous Papa to India pretty soon too.

We'd say, watch out Bollywood beauties because sexy Sinha has got a head start to getting noticed first thanks to her designer friends, whose creations she adorned for the event. Although the fashionable beauty didn't meet Roberto himself, she has no doubt grabbed the perfect chance to be associated with the name.

BollyCurry cheers Cavalli Vodka's success in India, and thanks to Sinha's social life, we were able to keep up with the trendy new cocktail mixer for the coming Indian summer too!

Mandana Karimi and Radhika Apte come out in support of ...
33 minutes ago