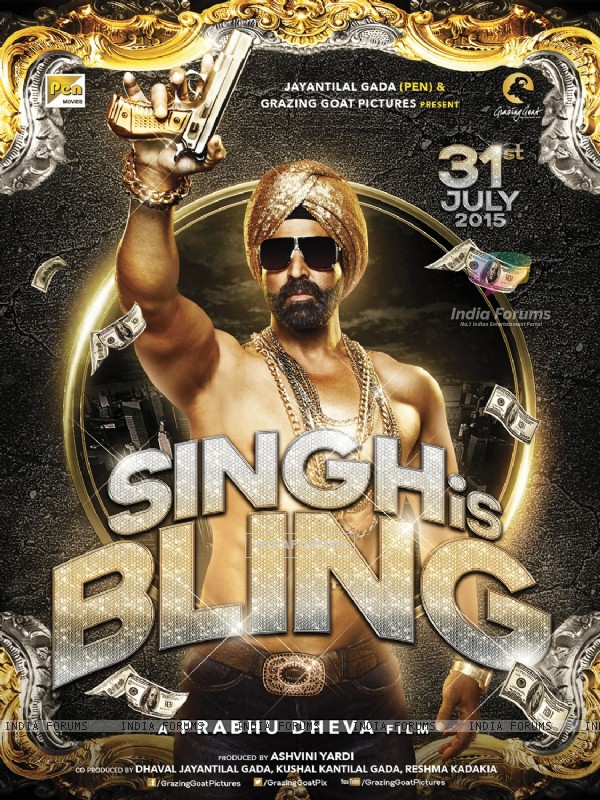 "Singh is Bliing". Indeed it is. The film is flashy, colourful and ostentatious from word go. But that's all there is to it. There is not much of a story anywhere.

Raftaar Singh (Akshay Kumar) is a good-for-nothing 'Singh' living in Bassi Pathanan in Punjab, who, according to his father, leaves every task unfinished, does nothing for a living and eats all day. Thoroughly pampered by his mother (Rati Agnihotri), he simply enjoys life.

As a punishment one day, Raftaar's father packs him off to Goa to work for a friend of his, Kirpal Singh (Pradeep Rawat).

Along with his two loyal friends, Pappi and Pompi, Raftaar lands up in Goa.

Because, "He may be silly, but is very dependable", his boss Kirpal Singh assigns Raftaar to take care of Sara (Amy Jackson), a special guest from Romania. She is in Goa to escape Mark (Kay Kay Menon), a ruthless, ambitious, eccentric drug mafia don in Romania, who is keen to marry her.

Raftaar is in a fix as he cannot speak English and Sara knows no Hindi. There steps in a translator Emily (Lara Dutta).

Amidst plenty of action, some out of context songs, oodles of silly humour, beautiful locales, the film progresses, entertaining the audience all the way.

Akshay Kumar is his usual Punjabi, energetic self, playing the quintessential sardaar, with action, romance and comedy woven into his character in abundance. Amy Jackson as Sara manages to look pretty, and yes, pulls off the action scenes convincingly. She is adept at doing what is expected of her.

It is Kay Kay Menon as Mark, who lights up the screen in a brilliant cameo after ages. "Easy is boring man, I like it," maybe his signature line, but the audience too likes him. With a swagger, attitude and get-up that he carries off with panache, he is a delight to watch.

The surprise element in the film is Lara Dutta, who plays the clever but harried translator for Singh and Sara. Her comic timing is impeccable and she delivers an unabashed, no-holds-barred performance.

Rati Agnihotri seems a gross misfit as the loving and indulgent Punjabi mother. She lacks energy, does not get the accent right and merely walks through her role. Yograj Singh, who plays Raftaar's father, on the contrary, shines in his limited screen time and brings freshness to his character. Kunal Kapoor, although seen on screen after a long hiatus, adds nothing to the film by way of performance.

Prabhudheva's direction is nothing to write home about, yet, his stamp on the film is evident in certain scenes.

Dudley's cinematography does justice equally to the beautiful locales of Punjab, Romania and Goa, making you want to be in those places.

The music is expectedly oozing with Punjabi flavour - bhangra beats et al but fails to charge you, more so because of the absurd and obnoxious lyrics - "Choon Chaan" and "Tung Tung Baaje".

Overall, "Singh is Bliing" does not disappoint. One steps in expecting mindless humour, entertainment and some fairly good performances and on that front the film delivers. That there would be a spectacular story was never an expectation anyway.

jasmeet92 3 years ago It is really a entertaining movie and Akshay Kumar's performance is amazing in the movie and Amy Jackson's action scene's is fantastic.

mmbollyvision 5 years ago Singh is bling is really very interesting movie and ation scene's of amy jackson is very good.