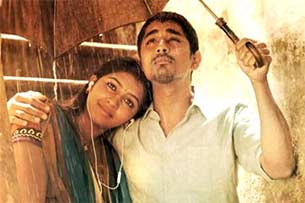 Popularly known for his romantic roles in several southern films, actor Siddharth says forthcoming Tamil gangster-drama "Jigarthanda", has given him the opportunity to shed his boy-next-door image.

"I'm known for my boy-next-door kind of roles through most of my films. This film ('Jigarthanda') has given me the opportunity to get rid of that tag. Post 'Jigarthanda', audiences won't call me a chocolate boy anymore. This role has allowed me to showcase my versatility," Siddharth told IANS.

In the movie, Siddharth reportedly plays a filmmaker who gets embroiled in a dangerous situation while trying to make a film on a real gangster in Madurai.

Siddharth is in awe of Karthik, who he feels will break new grounds with this film.

"Unlike other filmmakers, he gives the audience what he wants them to see and not the other way around. He is someone who isn't afraid to go against the grain and break rules. I like the fact that he doesn't surrender to the demand of the audience," he said.