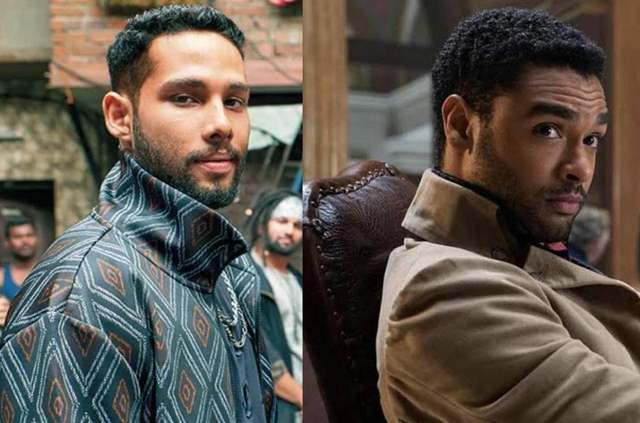 Siddhant Chaturvedi has become one of the most drooled over actors of Bollywood with just his debut performance as MC Sher in Gully Boy. His good looks and charming personality have left a lot of women mesmerised.

Recently the actor took to his instagram to share a still of himself from Gully Boy alongside a still of Rege-Jean Page from the famous series Bridgerton captioning it, "Sacchi? ??".

The fans have gone crazy since then as they are not able to deny how similar Siddhant looks to the Bridgerton fame star. Many have been left wanting to see Siddhant in a royal, romantic role like the Duke of Hastings since and are going gaga in the comment considering his dazzling personality and super handsome looks would make for a perfect choice.

The Gully Boy actor frequently shares glimpses from his life as juggles between various shoots. Whether its the Phone Bhoot gang having fun or vibing with Deepika and Ananya on a boat, he seems to share a great camaraderie with his co-stars.

The young star will be seen in multiple projects alongside many big names of the industry like Shakun Batra's next with Deepika Padukone and Ananya Panday, Bunty Aur Babli 2 with Saif Ali Khan and Ranj Mukherjee, Phone Bhoot with Katrina Kaif and Ishaan Khatter as well as his debut into an action flick with Yudhra opposite south star Malavika Mohanan.