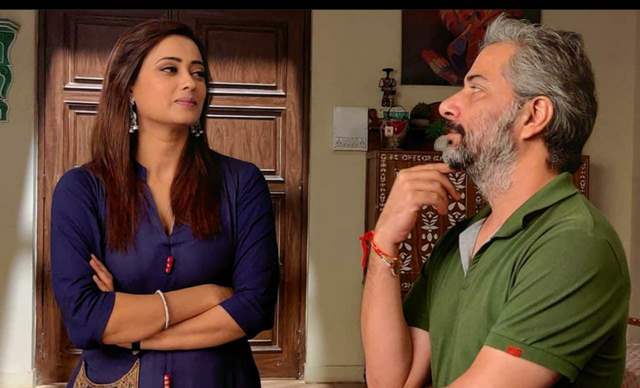 Sony Entertainment Television’s popular show Mere Dad Ki Dulhan has been successfully keeping the viewers entertained and glued to the screen with its interesting storyline and performances by the cast. The show is much loved for the chalk and cheese chemistry between the lead pair, Amber Sharma and Guneet Sikka played by Varun Badola and Shweta Tiwari. After Guneet chose to forgive Amber, she has witnessed the change in his behaviour and how Amber has always harboured feelings for her. Finally, in the show, Guneet has warmed up to Amber and will confess her feelings for him. This will make for one of the most interesting turns in the plot.

Finally, Guneet and Amber’s love story will kickstart in the show and it will be a visual delight for the fans as soon as that moment will arrive when Guneet will give a positive response to Amber’s love proposal. Speaking about Guneet confessing her love to Amber, Shweta shares, “Guneet is a very self-sufficient woman who can take care of herself. She is responsible and dedicated towards her mother as well as her career. She has always voiced her opinions and called it a spade a spade. However, over the time, she did wish to have a companion by her side with whom she can share her high and low moments in life. Even after she has been deceived many times, she developed a soft corner for Amber after a rocky patch and realises that he is genuinely fond of her and can make for a suitable partner. So, when Amber arrives at the party without letting Niya know and tries to win her heart, Guneet melts and confesses her love to him.”

She further added, “My preparation was basically to understand the emotional state of my character at this point, to internalise the emotions that Guneet is going through right now. I personally feel that I am living Guneet’s life, as I am so attached to Guneet and Amber’s journey. Every scene I perform, I want to know how Guneet will react next. And, I am glad that Guneet could finally see clearly Amber’s true feelings for her. Now that they are in love, it’s a refreshing wave of romance in Mere Dad Ki Dulhan that the audience will enjoy watching.”

Priyanka Chopra announces her next Hollywood project with Celine ...

Breaking
Breaking Doctor visits Anushka Sen on the sets as she suffers from throat ...

exclusive
Exclusive Akanksha Juneja: I am in love with my character in Saath Nibhana ...

Vikrant Massey and Sanya Malhotra roped in for Shanker Raman’s ...

Divya Agarwal's father passes away due to COVID-19

Shraddha Kapoor to be the New Nagin in Bollywood: "I have grown ...