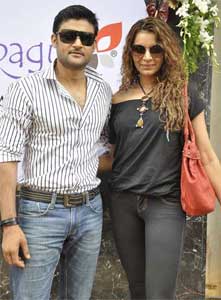 Telly Buzz earlier reported about SAB TV's Papad Pol witnessing a see a celebrity participation in the coming episodes of the show to judge a competition.

Last night's episode of the show saw the presence of Sharad and Kirti Kelar in the competition and the latest we hear is that Manav Gohil and Shweta Kawatra will also appear in the show as the next celebrity couple.

Telly Buzz contacted Manav and he said, "Yes, Shweta and I will appear as celebrity guests in the show to judge two competitions. I am very fond of Papad Pol as the show in itself has a great sense of humour."

Manav and Shweta have already shot for the episode and it will be on air in the coming episodes.