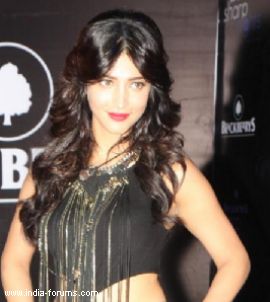 "(I'm) back in Mumbai and back to shoot. Bye bye appendix, hello New Year. I hate pain. Day one of 'Gabbar'," the 27-year-old tweeted post surgery.

Shruti, who was here Sunday to shoot for Telugu film "Race Gurram" and to promote her forthcoming release "Yevadu", was admitted to Jubilee Hills Apollo hospital after she complained of acute stomach ache.

"She was treated for appendicitis. Apparently, she was struggling with it for quite some time and she came in for a minor surgery and got it treated. She was kept under observation for a day, and was discharged Tuesday," an official from the hospital told IANS.

Shruti thanked her fans for their wishes on Twitter.

She wrote: "Hello tweeps! Thank you for all your love and get well soon wishes! (My) Appendix out and (I'm) raring to go albeit a bit slowly".

YRF dismisses Rumors of making a biopic on legendary ...
8 hours ago