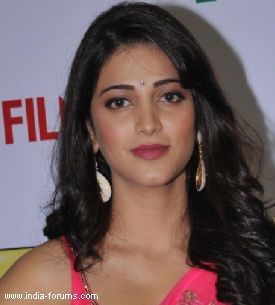 Actress Shruti Haasan, who was in the city shooting for upcoming Telugu film "Race Gurram", was Sunday admitted to a private hospital after she complained of acute stomach pain.

Busy promoting her forthcoming release "Yevadu", she was present at its app launch when she complained of the pain.

"Despite her shooting pain, she attended the app launch of our film. Soon after the event, she was taken to the hospital," he added.

Shruti, daughter of actor-filmmaker Kamal Haasan, has worked in Telugu films such as "Gabbar Singh" and "Balupu".