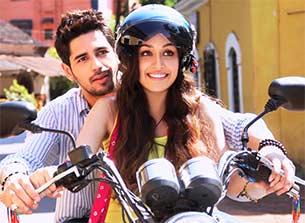 Shraddha Kapoor lost her balance while riding a bike during the shoot of Mohit Suri's 'Ek Villian'.

The biker girl's bike went out of control while filming an important sequence and slumped on the road.

Says a source, "In the scene that was being shot, Shraddha was meant to overtake Sidharth Malhotra who was also on a bike. She accelerated too much and the bike sprawled. She was badly bruised on her elbows and knees but the helmet saved her."

Shooting was delayed for an hour as doctors attended to Shraddha but the professional that she is, she decided to not cancel the shoot, which is now complete.