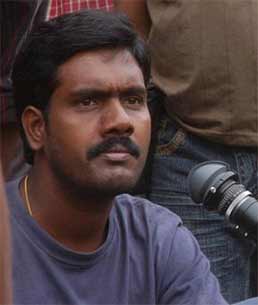 Cinematographer Richard M. Nathan, who recently completed work on Tamil action-thriller "Naan Sigappu Manithan", says shooting a film with a hand-held camera is physically taxing and takes a toll on the body.

He says even if he's paid a hefty sum by producers, he won't shoot a film using a hand-held camera at least for the next two years.

"Shooting with hand-held camera has been physically exhausting. When you're using a hand-held camera, you (cinematographer) have to literally carry its weight on your shoulder. A hand-held usually weighs about 18 kg and you have to carry it for at least 12 hours a day. You can imagine the physical damage," Nathan told IANS.

"Even if producers are willing to pay me more for a film, I'm not going use a hand-held camera at least for the next two years. I have already been admitted to hospital a few years back for a back problem. I don't want to face the same fate," he added.

Nathan had to seek medical attention after working on the 2010 award-winning Tamil drama "Angadi Theru".

"We spent over 100 days on this project. It was completely shot using hand-held. By the time I finished the project, I had hurt my spine. I was admitted to a hospital and I recovered with great difficulty," he said.

"Since I'm six feet tall, I need to bend a little while using the hand-held camera to capture the shots from the required position. This puts a lot of strain on my spine because here, we're talking about shooting for long hours in such positions," he added.

For "Naan Sigappu Manithan", the cinematographer shot 40 percent of the film using a hand-held device, while the remaining movie was filmed using a moving camera.

"The visual treatment in the film changes pre and post interval. When you watch the film, you'll realize that a lot of emphasis is given on the close-up shots. We did most of it using a hand-held. We also mixed it up with traditional camera shots at regular intervals," he said.

So, what's the advantage of using a hand-held camera?

"It saves a lot of time. Instead of wasting time and setting up a camera, you just pick up a hand-held and start shooting. Scenes that usually take a couple of days can be shot in about a few hours using a hand-held. It also provides greater freedom in motion while capturing," he said.

He says while films still use hand-held cameras every now and then, rarely can you find a film completely shot using it.

"It's impossible to zero in on a style and shoot a film nowadays. You can only shoot using hand-held camera when you have strong control over your lens. That's why very few films are made completely using a hand-held," he said.

In the past, Nathan has worked on Tamil films such as "Ko" and "Vanakkam Chennai".

Sameksha did my makeup and also handled the camera and direction ...