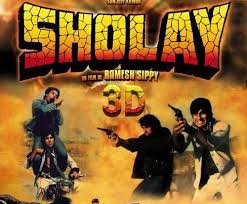 Sholay 3D is the first Hindi film that will be showcased on you tube's international 3D channel.

Its a big deal that India's first film to be on an international 3D channel will be the classic Sholay.

UTV and Jayantilal Gada specially wrote to YouTube internationally to see if it could be showcased on their channel along with the best of Hollywood 3D.

Sholay is a cult classic that is re-releasing in a new format on January 3rd.