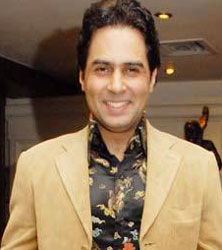 Out goes Shiv Subramaniam, and in comes the seasoned actor Aman Verma, who was last seen in Sony's Iss Jungle Se Mujhe Bachao.

According to our source, "Aman Verma who was earlier part of Balaji's Kyunki Saas Bhi Kabhi Bahu Thi and Kalash, will be making a comeback to the production house with this show. Aman has started shooting for Bayttaab and his entry will be aired tonight".

On the reasons for Shiv being replaced, our source states, "The script went thro' few changes, and because of this, Shiv Subramaniam was not found apt for the role. Hence Aman Verma was roped in to play the role of Kunal Mehra".

However, Shiv Subramaniam was shocked to hear the news and said, "I am hearing this for the first time. It is only thro' you that I am getting to know that I am not playing the role. Actually, Balaji approached me for the role. I had initially refused to do it because of my date problems. But later on, I accepted, and am still waiting to sign the contract with them. I had got a call from them few days back stating that the set was not ready, but I never knew that someone else has already been cast for the same role".

Aman Verma who has bagged the prestigious role confirmed the news though and stated, "Ekta offered me this role, and said that I was the perfect choice. Balaji is the biggest production house and will always remain so. Ekta has the knack of getting her right actors for her roles, and this is the reason why I accepted to play Kunal Mehra in Bayttaab".

Elaborating on his character, Aman says, "I play the sophisticated high profile lawyer, who is a charmer in terms of looks. He dotes on his family, which comprises of his younger brother and sister-in-law and their children. I always take up offers based on the project offered. This is a very challenging role; something as difficult and complex as my role in Viraasat".

Vikas Goopta, Creative Head, Bayttaab confirmed the news saying, "Instead of Shiv Subramainiam, it is Aman Verma who will be playing the role of Kunal Mehra in Bayytaab".

We wish Aman a great second innings with Balaji Telefilms..

nightwalker 11 years ago I SEE THIS AS ANOTHER KASAM SE. AND NOTHING ELSE. LOOKIG AT AMAN'S ATTITUDE I WAS EVEN MORE CLEAR THAT EKTA IS ON HER WAY OF MAKING ANOTHER JAI WALIA.WHATS NEW THEN?

Monu-SunNaa 11 years ago Good going for Aman, he is a very good actor, hard luck to Shiv. Some things are not meant to be.

rittu_deep 11 years ago 3 leads have been replaced because of Sumana 'Shamoli' Das--- Karan Sharma, Anupriya Kapoor and Shiv Subramaniam. For one girl, 3-3 replacements.Only god can save this show.

Naaa ree.. i think he is opposite JIJI! The elder one forgot her name...! i simply loooovveeee aman :)

devashree_h 11 years ago Good...Shiv would have looked too old opposite the lead.

He is opposite the second sister!!!!

He is opposite the second sister!!!!

aish_punk 11 years ago Hmm nice!
but is he cast opposite any1?