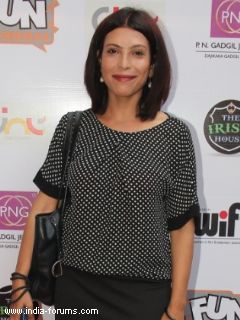 It was a double treat for "Chak De India" actress Shilpa Shukla when she got a chance to visit this Jammu and Kashmir region this time of the year - when she could attend the ongoing Ladakh International Film Festival (LIFF) as well as the 33rd initiation of Kalachakra with the Dalai Lama.

Kalachakra for World Peace, said to be the most sacred teaching and practice of Buddhism for peace, understanding, unity, world peace, tranquility and happiness, is happening for the second time in Leh - after a gap of 38 years.

An expected 1,50,000 people are likely to attend the event to be held July 3-14 at Jiwetsal in Shey, about 8 km from Leh, a picturesque destination in Jammu and Kashmir.

Shilpa is upbeat too.

"I was anyways planning a trip to Ladakh - I knew the Kalachakra was happening and the film fest too. They say, when you wish for something so bad, it just comes true and how! So it's beautiful that both the things are happening at the same time, and it's a blessing to be here," Shilpa told IANS.

In all likelihood, Shilpa, who has also featured in movies like "B.A. Pass" and "The Coffin Maker", will not attend the event on all days.

"I'm definitely attending teachings for two days by His Holiness because being an actor, my brother who is a Rinpoche, he said the skin can get ruined while sitting out in the sun for 10 days because the sun is too strong here.

"But at the same time, chances like these don't come again and again. So I might end up staying. However, I'm attending for two days for sure."

Asked if she was a follower of Buddhism, Shilpa had this to say:

"It's become more of a belief system. It's the only way to function I guess. It gives you a lot of peace and introspection."