View Profile
Shilpa mania hits Germany;even before her musical does!

Germany perceives Shilpa as 'the face of new India'; compares her to Mother Teresa and Indira Gandhi. 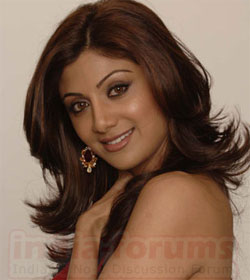 Featured Video
After becoming a household name in the United Kingdom, Shilpa Shetty is out to win hearts in Germany now. And if the initial reaction is anything to go by, she's already on a very strong footing.

Shilpa's West End musical 'Miss Bollywood' is to premiere in Berlin, Germany, on September 29, while the media in Hitler-land is already floored by the dusky beauty.

"Shilpa is hoping 'Miss Bollywood' would bring the European audience closer to the grandeur, opulence and true essence of the world's largest film industry", states her indefatigable publicist Dale Bhagwagar, the man responsible for keeping 'Brand Shilpa Shetty' in news 24x7. "The musical is a concoction of riveting dance sequences, showcasing a combination of diverse dance forms taken from the east and west of India, absorbed and transformed into the phenomenon known as 'Bollywood' dance," Bhagwagar adds.

The musical will have Shilpa Shetty recapturing on stage some of the Bollywood's greatest hits. Directed by Morani Brothers & Soorma and Michael E. Ward, it is produced by Farhath Hussain. Ganesh Hegde has done the choreography, while Neeta Lulla has designed the costumes.

In a full page interview for Germany's largest broadsheet, 'Sueddeutsche Zeitung', there are high words of praise for the Indian actress. One of the country's leading journalist Von Wolfgang Koydl, who interviewed Shilpa in London, writes in detail about how he met her, how tall she is, and goes ga-ga over her beautiful silhouette. "Not only is she beautiful and ravishing, she is also very intelligent. She speaks nine languages and is familiar with Shakespeare literature. Although Shilpa may not be the biggest Bollywood star, she definitely is one of the most popular ones," writes Koydl in his article.

The article goes on to describe how Shilpa started her career, stating that she is different from other Bollywood stars in the sense that after 'Celebrity Big Brother', she is extremely popular abroad. "Rumoured to star opposite Daniel Craig in a Bond movie, she was kissed by none other that the 'Pretty Woman' hero Richard Gere and now she's coming to Germany with her musical," says the article.

He article ends saying "Shilpa is the face of new India, different than the one symbolised by Mother Teresa and Indira Gandhi."

Now it won't come as a surprise at all, if we hear the words "Heil Shilpa" soon!