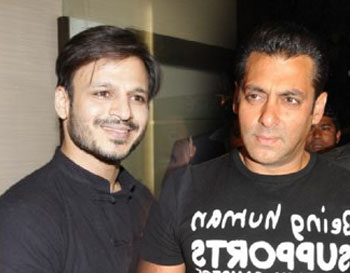 Salman Khan is gearing up for the release of "Ek Tha Tiger" and his not-so-good friend Vivek Oberoi has signed "Sher". So who will prove to be "sher pe sawa sher" (one up) at box office? Vivek says 'sher' (lion) is bigger than a tiger.

"We are all wildlife enthusiasts. As far as my knowledge is concerned, 'sher' is bigger than a tiger," Vivek told reporters in a light-hearted remark when asked about the two films.

When further queried about Salman's another film "Sher Khan", Vivek said: "It's a good thing. The city is filled with sher (Sheronka shehar hai)."

He was speaking on the occasion of World No Tobacco Day, which is May 31, at the 92.7 BIG FM studios.

Bollywood actors Salman and Shah Rukh Khan are seen as icons, but they are chain smokers. Vivek defends them, saying they acknowledge that smoking is a bad habit.

"They always say in all their interviews that they try to quit and it's a bad habit ...the biggest problem with smoking is that it's a very individual decision. Whatever you do, people take their own time to quit cigarette," the 35-year-old said.