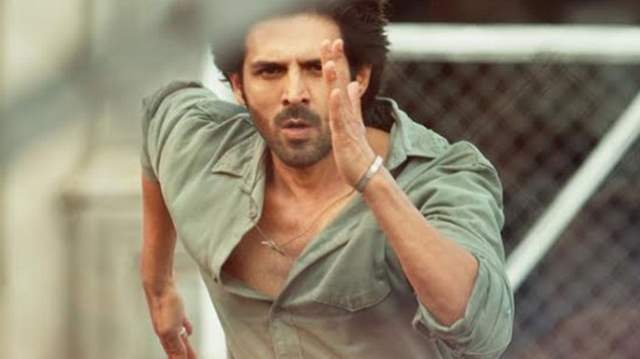 Currently Kartik Aaryan is riding high on the success of his last film Bhool Bhulaiyaa 2. But that's not the end, because the actor has a boat load of projects in his kitty and one of the most anticipated amongst them is Shehzada which will star Kriti Sanon opposite him.

While fans have been awaiting new details regarding the film, Kartik took to his Instagram handle and offered a glimpse of his look from the film. In the picture hared by him, he can be seen in  sporty and sharp look as he is sprinting towards something. Aaryan is sporting an olive green shirt with  silver kada in his hand. Sharing the picture he wrote, "Shehzada Returns Home", with a crown emoji. He also unveiled the release date of the film which is slated to be Feb 10th 2023.

For those who are unaware, the film directed by Rohit Dhawan is reportedly a Bollywood adaptation of Allu Arjun's Ala Vaikunthapuramuloo. Kartik has previously stated in an interview that he will appear in a different avatar this time.

He believes that Rohit, his director, has masterfully adapted it for the Hindi audience. It is one of those movies that appeal to a wide range of viewers. He is eagerly anticipating the movie and is really excited. For the first time, people would get to see him in this entire action and comic persona, Kartik had remarked.

Interestingly, Shehzada will be Kartik and Kriti's second joint project following the 2019 film Luka Chupi. In addition to the action drama, Kartik is working a number more appealing films. He will appear as a pilot in Hansal Mehta's Captain India. He will also be a part of Shashank Ghosh's Freddy alongside Alaya F, and Sameer Vidhwans' untitled directorial.

+ 8
2 months ago i didnt realize him and kriti were doing another movie together. i guess this is why there are rumors doing the rounds that they are dating