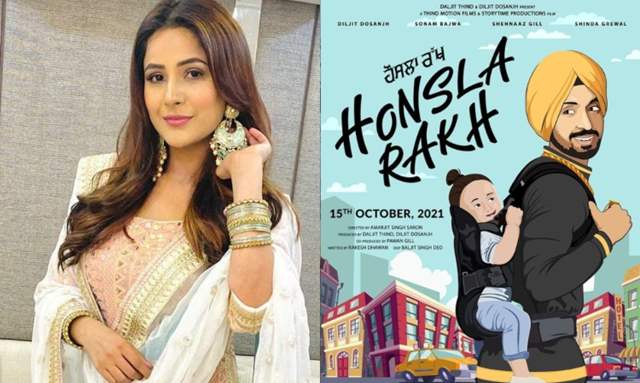 Shehnaaz Gill is all set to be seen in a Punjabi movie with Diljit Dosanjh along with Sonam Bajwa and Gippy Grewal's son Shina. Diljit took to social media as he shared the poster of the film titled Honsla Rakh and it will be releasing in theatres on October 15 thereby making it a Dussehra release. With this film, Diljit has also turned producer and will be co-producing the movie with Daljit Thind.

Shehnaaz was snapped at the airport last night and it also lead to all the fans going into a frenzy wondering what is up ahead for the singer, and popular Bigg Boss 13 contestant. With Diljit's announcement and poster release, we now know what is in store for the audiences.

Shehnaaz rose to fame with her stint in Bigg Boss 13 and she managed to win the hearts of the audiences with her funny antics. She has been working on a couple of music videos post the show and has mentioned in one of her interviews how she is looking at doing quality work. While Shehnaaz's role is not known yet, we bet fans are looking forward to seeing her in the Punjabi film.

+ 2
11 days ago Shehnaaz is an inspiration for many. The way she is fulfilling her dreams. Working with Diljit Sir was one of them.