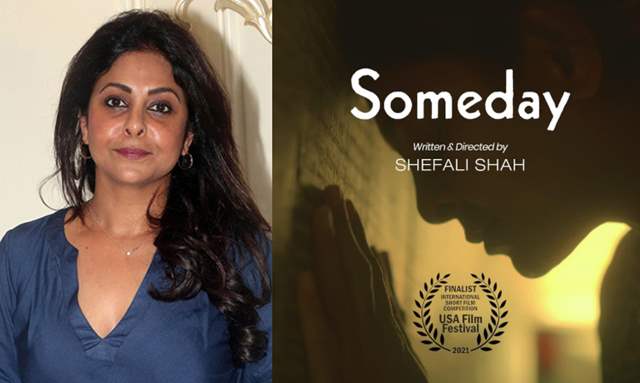 Shefali Shah is on a roll! After her web show ‘Delhi Crime’ won the Best Drama Series award at the International Emmy Awards last year, the versatile actress’ debut directorial venture, ‘Someday’ has been selected for the 51st Annual USA Film Festival’s International Short Film & Video Competition. The short film, directed by Shefali, has been shortlisted in the finalist category of the Oscar-accredited film festival and will undergo the final round of judging next week.

‘Someday’ is a story of two women, united by the umbilical cord, separated by a door. Vidhi, a frontline warrior consumed by the medical situation tormenting us. After 15 days on duty, she comes home to a 7-day quarantine. But, can one call it home, when there’s the only distance between her and the one she loves, her mom, who is gradually turning into a relic of herself due to Alzheimer’s. They share conversations from the past and the future with no present to tie them. Some real, some imaginary. Their togetherness oscillates between what was, what can’t be, and what may just be someday.

The USA Film Festival, scheduled from April 21st to 25th is a Dallas-based, 501c3 non-profit organization dedicated to the recognition and encouragement of excellence in the film and video arts.

Shefali Shah informs, “'Someday' is my first trial and error with direction. Our labor of love has made it to the final selection of the USA film festival, and I can’t even begin to tell how excited I am. The reason I send it to the festivals across the globe was to see where I stand as a total newcomer in the direction. And this is such a big assurance that I must’ve done something right.”