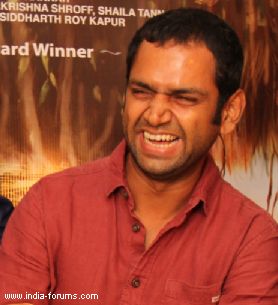 The acting bug bit "Filmistaan" actor Sharib Hashmi when he was just a child. But he buried his acting dreams for things his heart was "clearly not into". He credits his wife as well as friend Nitin Kakkar for helping him to resurrect his dreams.

He said: "When I wasn't getting anywhere with those dreams, I decided to store away my acting ambitions. I got busy working on television doing MTV's 'Bakra' and other spoofy stuff. But my heart was clearly not in it."

"However, I got married and I had a child. So my dreams had to be buried alive...only to be exhumed because of my wife's support."

Sharib's wife not only allowed him to give up his job, she also funded his acting aspirations.

"She sold all her jewellery so I could pursue my acting ambitions without worrying about the food on the table. Eventually, we even had to sell our house. But I ddn't give up."

If now Sharib has finally found his acting grooves, he credits it only to two people in his life.

"If it wasn't for my wife and my friend Nitin Kakkar ('Filmistaan' director), I'd have given up the fight to become an actor long ago. They kept encouraging and supporting me in my crazy ambitions. When Nitin offered me the lead in 'Filmistaan', it was as though he was telling my story," he said.

Now Sharib has made another lifelong friend. "Inaamulhaq, who plays my friend from Pakistan in 'Filmistaan', has become a friend for keeps. Our friendship started while we played friends in the film. It continues beyond the film."

Like the character that Sharib plays in "Filmistaan", he too is obsessively attached to Bollywood cinema.

Like his character, Sharib too ended up as an assistant director while waiting for the acting opportunities to come his way. He even played Shah Rukh Khan's best friend in Yash Chopra's "Jab Tak Hai Jaan".

"No one remembers me in that film. How can they, with big stars like Shah Rukh, Katrina Kaif and Anushka Sharma around? I don't blame anyone for not selecting me to do a film. I hardly look like a movie star. But my passion for acting is all-consuming. You can't keep me away from the camera," said Sharib.

"I've grown up watching and worshipping them. What you see in 'Filmistaan' is not fake. Just like my character, I truly worship Hindi cinema and all things Bollywood. To be part of it, I sold my home and my wife's jewellery. No sacrifice is too big to be part of the movie world," he said.

Now after watching him in "Filmistaan", filmmaker Nikhil Advani has signed Sharib for a political satire.

It is again political satire, though not dealing with the India-Pakistan issue at all. This time, Sharib will be looking at the politics within the nation and how corruption in official services and the bureaucracy has stymied the growth of the common man.

Exultant and relieved, Sharib said: "I look like a common man and I am happy playing the role. The role in Nikhil Advani's film is far removed from 'Filmistaan'. There's no comic element in my next outing. That's a welcome change. I don't want to be known only as a funnyman."