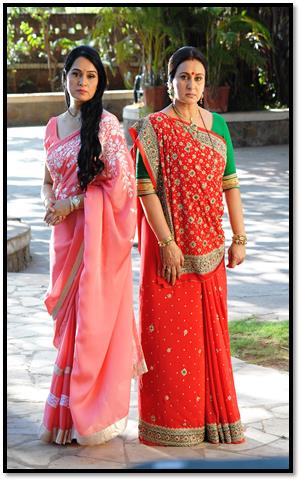 The versatile actress Padmini Kolapure entered the show who is seen playing the role of Pallavi Ajmera(Padmini Kolhapure), a strong business woman. Pallavi Ajmera will be seen as a love interest of Suresh Modi (Sooraj Thapar) and today the two ladies in Suresh' s life are going to come face to face.

In tonight's episode Sharda will be seen going to a Mall to get threads for her Sarees coincidentally Pallavi and Suresh will be in the mall. Fate will take its turn when Sharda and Pallavi will come face to face to each other.
9 Likes

Ms.S.K. 6 years ago In last night episode they already met in the mall

Ramanitennekoon 8 years ago I think Bipasha or Viday Balan will be the best actresses to do Rekah's role. Both are perfect!

Mrs.K.B.Sobti 9 years ago lol zaxo.
i was going to say the same thing!

shambo88 9 years ago Kajol is the best actor to portray such a complex role...

dua_44ever 9 years ago Rani Rani! This movie has Rani written all over it :)

..SchnellBus.. 9 years ago Bipasha is very talented so i think she would be perfect.

lilmzsunshine 9 years ago Vidya balan would really do justice to this - or Madhuri.