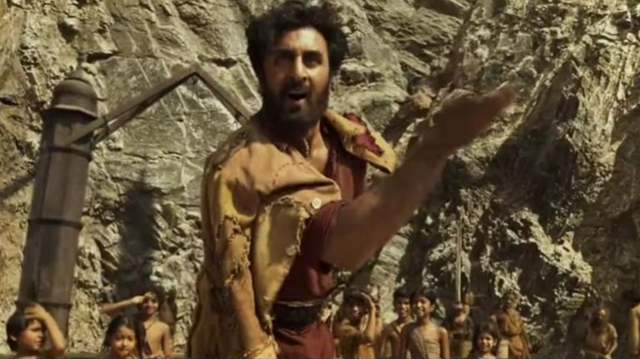 Fans of Ranbir Kapoor have every cause to be ecstatic right now. After all, Ranbir Kapoor is about to make his big-screen comeback with Shamshera. And since yesterday's pregnancy announcement from his wife Alia Bhatt, the happiness has doubled amongst all.

Naturally, the film's creators are doing all in their power to ensure Shamshera's success. The first song from the film, named Ji Huzoor, will be released tomorrow. This follows the release of the film's fascinating trailer, which was directed by Karan Malhotra.

The song's teaser, which was published by the makers, shows Ranbir as Shamshera's son Balli dancing with young children in the Kaza fort jail where the tribe is mercilessly tortured by Shuddh Sing (played by Sanjay Dutt).

According to a report from Pinkvilla, Ranbir talked about his character from the film. The actor said, “Balli is someone who, despite all the oppression and humiliation that he has faced, is full of life, he is mischievous and the kids of Kaza look up to him and he loves them dearly”. The Rockstar actor revealed that Balli shares a great bond with kids and together they often bring a smile to the face of prisoners in Kaza.

He also opened up about Ji Huzoor, Ranbir said it is a sweet and fun song about that one rare break-free moment that Kaza and revolves around Balli and his relationship with kids.

Apart from Ranbir Kapoor, Shamshera will also feature Vaani Kapoor and Sanjay Dutt in the lead. Interestingly, the movie will feature Ranbir locking horns with Sanjay Dutt for the first time. Shamshera is slated to release on July 22 this year.

+ 2
1 months ago Is that his leg in the first pic? I had to concentrate very hard to figure that out...