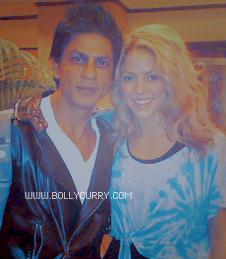 been roped in to sizzle in an exclusive music video with Bollywood's superstar, Shah Rukh Khan himself! It is heard that SRK had been long wanting to 'spice up' the promotional music video of his popular IPL team, The Kolkata Knight Riders, and therefore has gone ahead and asked the very popular Latin singer, Shakira, to add some fusion flavor to the video!
Shakira has readily accepted SRK's offer to feature in KKR's music video and is very excited to work with the King Khan. SRK will begin the shoot for this video after he wraps up his shooting for his upcoming venture, Don 2. The song has been composed by the popular music composer duo Salim-Sulaiman and has been sung by Rahat Fateh Ali Khan.
With the KKR team failing to impress the crowd year after year, here's hoping Shakira will bring in the much needed luck for this team!
Editor(s): Lola & Gunia.
Graphics: Shikha.