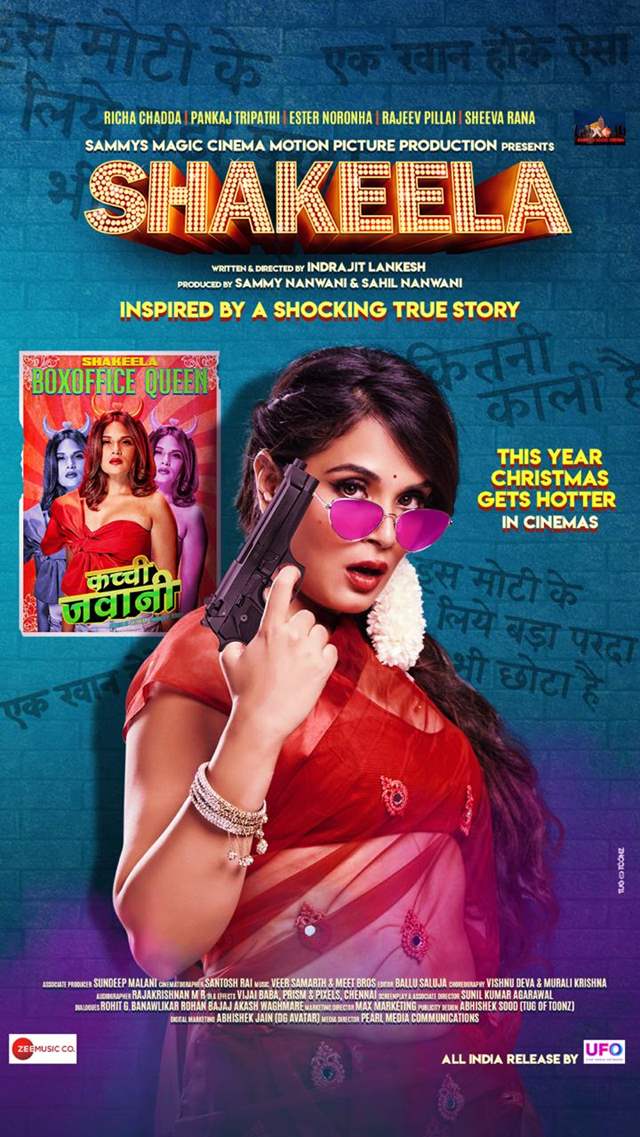 The first poster of Shakeela starring Richa Chadha met with a lot of excitement and intrigue from the audience on social media. And now, the film that chronicles the life of soft-core sensation, Shakeela, is all set for a big screen multi-lingual release on Christmas. This announcement put to rest months of speculation surrounding the release of the film.

The latest poster of the film that launches today features Richa in a glamorous avatar. Draped in a saree and with a gun in her hand, she pays the perfect ode to the South siren. In the background, there are allusions to her epithet of a box office queen, along with obscene words related to her body, religious affiliation and skin colour. The poster is a testament to the fact that Richa conveys Shakeela's attitude and style with a rare spunk and vivacity. It also communicates that it is no dirty picture and explores Shakeela’s world beyond her erotic image and stardom.

Inspired by a shocking true story about the life of superstar Shakeela, the film traces her journey - filled with hurdles and discrimination – from playing side characters to becoming the face of B-grade films and eventually reaching the pinnacle of glory. Soon, she began threatening the stardom of the biggest superstars of that era in the South film industry.

Born in a conservative Muslim family, Shakeela began her career at the age of 16. Having worked in about 250 films, she emerged as an adult star who ruled the South film industries in the late 1990s and early 2000s.

Talking about the film, director Indrajit Lankesh says, “Shakeela is my passion project. I have known her since 2003 when I worked with her. Her rags-to-riches story caught my attention. I did some extensive personal interviews with her and came to know so much about the person that she is behind that image of a star. And I knew that it is only Richa who can nail the part. This film will help youngsters who aspire to be part of the film industry understand that there is more to the overlying glitz and glamour.”

Touted to be the biggest release post the nationwide lockdown, Shakeela also stars Pankaj Tripathi and Malayalam actor, Rajeev Pillai. The film is presented and produced by Sammys Magic Cinema Motion Picture Production and distributed by UFO. It is slated for a Christmas release