View Profile
Shahid Kapoor's birthday bash has been the talk of B-town. Shahid, who celebrated his 31st birthday in Goa on 25th 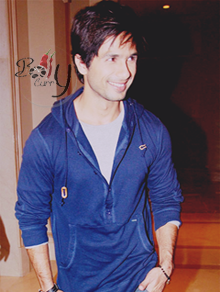 February, is not really known for throwing parties but this time he has organized his birthday in a grand way.

His guest list included Nargis Fakhri, Rani Mukherji, Kunal Kohli, Tabu, the newly wedded couple Riteish-Genelia and many more celebs. But once again, his ex-flame Priyanka Chopra, was left out of the guest-list. This surprised a few as both Shahid and Priyanka are supposedly maintaining a corfial relationship and are even currently working on Kunal Kohli's film Teri Meri Kahani.
The grand birthday bash was held at his friend's bungalow in Morjim Beach. And apparently was a huge success if posts on Twitter are to be believed!

Another interesting tidbit was that while guests mad their way down to Goa on Thursday night, Shahid reached Goa on Wednesday along with Rockstar girl Nargis Fakhri.

Something going on between Shahid and Nargis? Only time will tell! Till then we, here at BollyCurry, wish Sasha a very happy birthday and lovely year ahead.

Delnaaz Irani speaks about entering Choti Sarrdarrni, her ...
42 minutes ago