View Profile
The newly-fascinating friendship of Bollywood heartthrobs Shahid and Ranbir Kapoor has been the talk of the town recently. So much so that the buzz is all aware of their pairing up in the Govinda-Chunky Pandey starrer Aankhein remake. 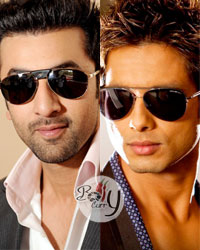 So when the Morani Brothers organized actor Ranbir Kapoor's first ever official world tour, Shahid was soon roped in by best-buddy Ranbir to be a part of the concert and as it seemed to be then, Shahid had agreed duly to rock the events.


However, the truth is far from it!

Apparently, Shahid is not too keen to be a part of this event owing to the fact that it is being promoted as 'Ranbir's official world tour'. Shahid, who wanted to share the same platform with fellow actor Ranbir, has made it very clear that he won't be available for the tour due to his prior film-commitments this year.

The story, according to what we've heard, is something else - upset with the reports of him joining what was being called 'Ranbir Kapoor's world tour', Shahid had called the organizers to let them know that if they wanted him to be a part of the show it had to be promoted as 'Shahid and Ranbir's world tour' and that he'll be free sometime around April next year. He stressed that he would only be a part of the show if his demands were fulfilled.

Both actors are currently busy with their next flicks which are slated to release mid 2012.

Even after all this, he's still good friends with Ranbir and holds him in high regards; but doesn't want to mingle his personal life with his professional one!