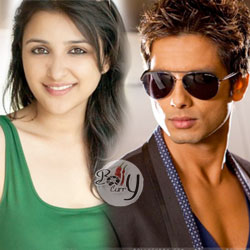 Parineeti Chopra, who debuted with Yash Raj Production's Ladies vs. Ricky Bahl last year. The two will be seen together in an upcoming Yash Raj venture.
Apparently, the film will be directed by Band Baaja Baarat and Ladies vs. Ricky Bahl fame Maneesh Sharma and will have two, instead of one, leading ladies. The second female starlet remains to be finalized.
Of late, Shahid has been linked with Rockstar fame Nargis Fakhri. Ever since their overly friendly behavior at Shahid's birthday bash in Goa recently, all eyes have been on the two! Although neither of them have come out in public about their relationship status, the two have been continuously in news for their assumed love affair.
While Shahid has recently packed up from his film Teri Meri Kahaani with Priyanka, Parineeti is still busy with her upcoming film Ishqzaade in which she's been paired alongside Boney Kapoor's son Arjun Kapoor; slated to release on May 18th.
Here's wishing the unique pair luck for the venture!