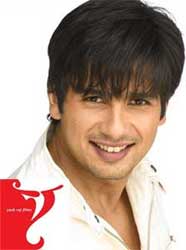 Bollywood actor Shahid Kapur seems to have become Yash Raj Films' (YRF) favourite. His first venture with the production giant is yet to hit the screens, but the actor has already signed another film with the banner.

Shahid's first film with YRF is being directed by Anurag Singh. He has teamed up with Rani Mukerji in the film, which was earlier titled 'Hadippa', which is said to be about cricket.

The second project that Shahid has been signed up for will be actor Parmeet Sethi's directorial debut and he teams up with Anushka Sharma of 'Rab Ne Bana Di Jodi' fame.

'The Yash Raj camp sees Shahid as the classic romantic hero who has the potential to turn on the sexy or rugged vibe when required,' said a source close to the actor.