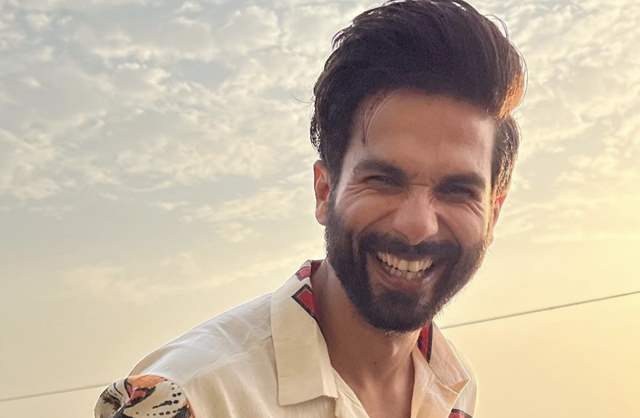 Shahid Kapoor is one of the most sought after actors in the industry. Kapoor is endowed with stunning appearance, exceptional dancing ability, and enviable acting skills.

Apart from this, he is also an avid social media user where has now posted a photo of himself on Instagram, offering his admirers the ideal remedy for the midweek blues. And it's a super adorable image showing off his "happy face" in it.

In the photo, Shahid Kapoor can be seen posing on the shores while sporting a patterned shirt and black pants. Sharing the picture Shahid penned, "Get your happy face on !!".

Recently, Sasha made headlines as he headed for a long vacation to Europe with Mira and their kids. The couple shared a myriad of pictures and videos, offering fans a peek at their romantic getaway.

Shahid and Mira celebrated their 7th wedding anniversary recently and have been sharing major couples goals since 2015.

Talking about his work life, Kapoor was last seen in the film Jersey. The film was a remake of the south film with the same title and starred actor Nani. While, the film couldn't do well at the box office, Kapoor garnered applause for his immaculate acting in the film.

Apart from that he will also be a part of Ali Abbas Zafar's next 'Bloody Daddy'. Talking about the film Shahid Kapoor had once remarked that, Ali Abbas Zafar has created something that is both thrilling and challenging. By the end of 2022, they intend to release the film, but if not this year, they will unquestionably try for early 2023, Kapoor added.