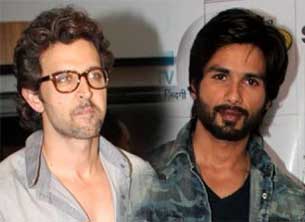 Shahid Kapoor, all set to host the 15th edition of the International Indian Film Academy (IIFA) awards with Farhan Akhtar, is known for his dancing skills, but the actor says he is not even a patch on Hrithik Roshan.

"I am extremely happy to host IIFA again and more than that I am excited to see Hrithik performing. He is the best dancer in the industry. I remember watching 'Koi... Mil Gaya' and I felt like a shit actor," Shahid told reporters Thursday at the IIFA press conference.

Shahid and Farhan had co-hosted the IIFA 2012 in Singapore and the latter said that it's great to be back as a host for the event which will take place in Tampa Bay, Florida from April 23 to April 26.

"I had a great time hosting the show with Farhan. It takes a lot of effort to create such an event and I am looking forward to be part of this," he added.