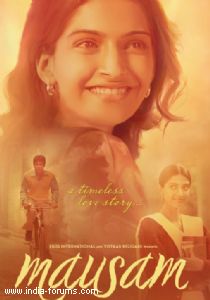 Mumbai, Sep 9 Eminent actor Pankaj Kapoor, who made his directorial debut with 'Mausam', has revealed that it was his son actor Shahid Kapoor who instigated him to make this directorial venture.

He also said both of them shared a very professional relationship all through the making of the film.

'He (Shahid) who asked me to direct the film that (is) how the projected started. So at a certain point when we started off to write the script we were in continuous discussion on whether he likes the script and whether he wants to be the part of it. So it was a very professional relationship we shared from day one,' said Pankaj at the music success party of 'Mausam' here at JW Marriot Thursday.

Pankaj was all praise for his son's dedication towards the film.

'When he showed his desire to be part of the film we started sharing a very director-actor relationship. I must say he has grown up as an actor, has built an identical personality. He has done some wonderful work in last eight years but when he set up to work with me he completely submitted him to me and gave me the full liberty to mould him the way I want. It itself speaks a huge about him,' said the National Award winning actor.

'Mausam' is a love story, which shows how a couple forced to estrange by socio-political situations around. It captures the crest and trough they go through a span of 10 years until they reunite and make a happy ending.

Some of his personal experiences influenced the story of 'Mausam', said the 57-year-old.

'Whatever story one develops, it's either you have experienced in your life, have seen others experiencing it or have read it somewhere or it's the mixture of all of them makes a story. Then you think that how to generalize the story so that a common man can relate to it.

'I think the strong point of 'Mausam' is either you want to be part of it, or you have already been through such situation or you would wish to experience something like that,' he said.

Actress Sonam Kapoor is playing the lead opposite Shahid in the film.