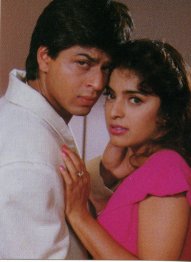 Bollywood superstar misses working with Juhi Chawla and director Aziz Mirza with whom he teamed up in the initial days of his career.

The 44-year-old was last seen with Juhi in Amitabh Bachchan starer 'Bhootnath', a comedy directed by Vivek Sharma.

Shah Rukh is the most popular Bollywood celebrity on Twitter with more than 400,000 followers.